GOUT PREVENTION AND TREATMENT WITH CANNABIDIOL 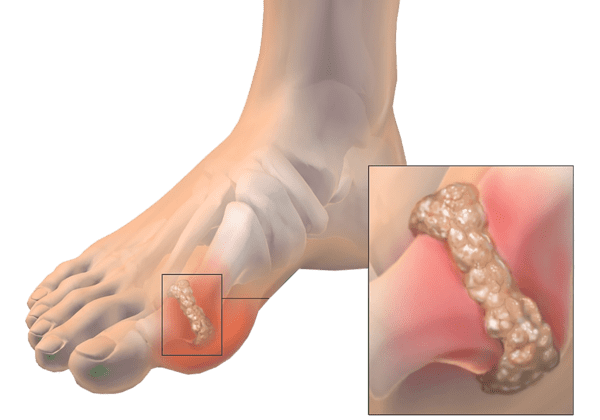 Just about five years ago, as I was enjoying some leisure time relaxing and reading a book, I suddenly felt some tingling in the big toe of my left foot.  Naturally, I attributed it to a new pair of shoes I had recently purchased which were a bit tight.  However, within a few hours, I was in a considerable amount of pain, so I began noting the swelling and erythema (redness) around that area.

It wasn’t long before I was certain that I was experiencing my first episode of Gout. The symptoms?  It was unusually painful.  Walking, and even working, were challenging.  Sleeping was very difficult as well, as the pain awakened me if the sheets merely grazed my toe.

Being a trained physician, you'd think I would seek medical advice. Did I?

Of course not!  Doctors rarely properly care for themselves.  Like most people, I took over-the-counter anti-inflammatory tablets (think: “Advil”) and several days later the pain and swelling subsided.  Within a week I was fine… enough.

What if I had chosen the conventional medical route?  Since uric acid is drawn from the blood into the joint during an attack, it often reads low anyway, so I never actually bothered checking my uric acid levels.  I had no interest in starting medically prescribed Allopurinol to lower my uric acid.

For about one year I was just reactive, so I relied on NSAIDs every time I had an attack, which commonly occurred every 3-4 months.

Over time, as I continued to learn more about the benefits of CBD, it came to mind that the daily doses of Whole Plant CBD that I had been taking for my overall health and well-being may very well have been a potential preventive therapy for gout.  Given the potential health costs of long term overuse of NSAIDs, Whole Plant CBD seemed like a great alternative.

By the end of that first year, unbeknownst to me, I had experienced my last episode!  It has been about four years since my last flare-up, and even the tiny amount of swelling that remained after my first episode has resolved.  Gout… GONE!!!

Cannabis as a Therapeutic Alternative

Over the past four years or so I have seen several patients with gout, and I have recommended a combination of both systemic CBD for prevention, along with a transdermal CBD/THC formulation for acute attacks.  With attention to symptoms, the preventive CBD alone may be all we’ll need to stay one step ahead.

There are currently about 8 million patients afflicted with gout in the United States, which is clearly a significant number, so further studies are certainly needed to determine the best and most effective Cannabis treatments for this condition.

Let’s give CBD a chance.